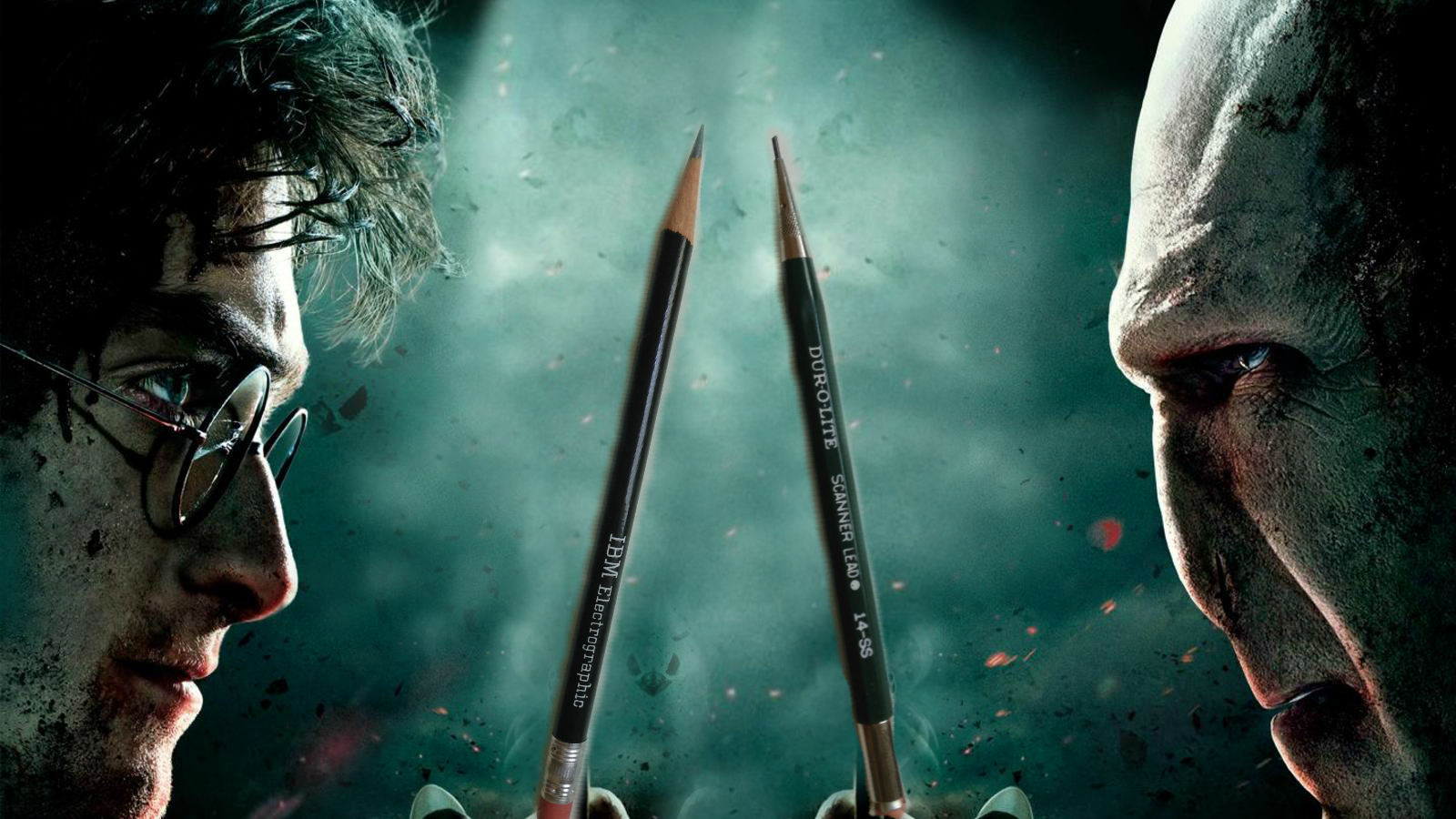 The mechanical pencil version is just so damned smooth!  It might never be as sharp as the woodcase pencil, but it will keep on going page after page without needing anything more than a twist of the tip.


What happens if you fight an IBM Electrographic pencil against a mechanical pencil filled with IBM lead?  Harry and You-Know-Who have an epic duel and the wands go crazy because they share the same phoenix feather core…  Obviously Voldemort has the mechanical pencil because he’s evil, but I wanted to know how the mechanical leads would stack up against the original wooden pencil.  I grabbed my IBM’s, a Goblet of Fire, and headed to the graveyard for a pencil showdown.


Well, enough of the gratuitous Harry Potter nerd-dom.  For the uninitiated, the IBM Electrographic pencil is a vintage pencil that some consider to rival the Blackwing pencil. If anything, the IBM is just as rare as the BW, but they cost less when you find them.  All it took was time and pressure...and money and ebay...before I lucked upon a good deal for IBM’s Electrographic masterpiece.  If you’re not interested in playing the ebay game, CW pencils currently sells them for $10 a pop, and it’s worth treating yourself if you have the means and want a cool vintage pencil.


I did a bit more research on IBM’s Electrographic and found an amazingly thorough (and German) write-up on them. Basically, IBM developed a machine that could sense special pencil marks in 1939, and also a special pencil that worked well with their system.  In order to work with the sensing machine, IBM formulated their own magical pencil formula: 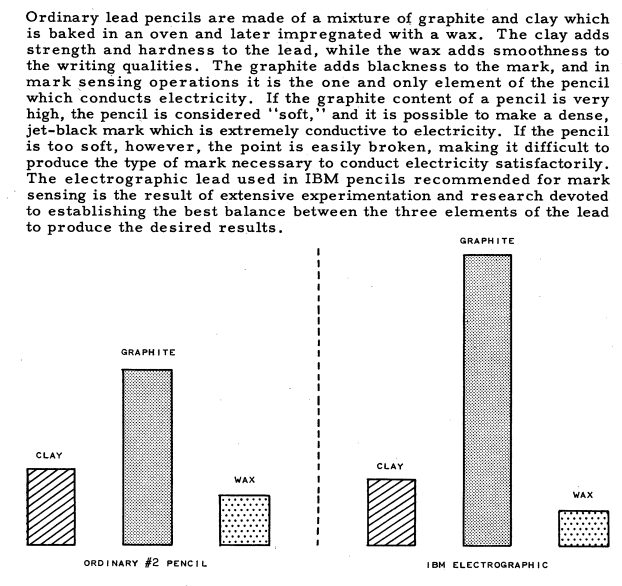 This system was the precursor to the modern Scantron tests that you were probably subjected to in school. Nowadays, you can use any old #2 pencil on standardized tests these days, but the old electrographic or 'mark sensing' pencils are still sought after because they leave a really nice dark mark.  The German testers likened the IBM to a normal 4B pencil, and this sounds about right to me. As IBM roared into the future, they also sold their electrographic lead for mechanical pencils. So what is it like to test pilot the IBM Electrographic? I’ll start with the classic wood case pencil.  First of all, you can feel how substantial it is -- it’s round and feels a bit bigger in my hand than an average hex-shaped pencil.  I have to confess, I’m a big fan of round pencils for everything besides taking pictures of them...they seem to resent having logos exposed to the camera and are always rolling away.  The paint job looks nice and glossy, but isn’t slippery in my paw even when I’m a little clammy.  The wood is about as good as they get and has that wonderful vintage pencil smell of old cedar mixed with old desk drawer.  In my hand, it writes darker and smoother than a Palomino Blackwing Pearl, which is an impressive feat.  Like all smooth dark pencils, the lead does wear down pretty fast.  I wrote a test paragraph in IBM and Palomino Pearl, and the Pearl tip lasted a smidge better.  I felt like I was pressing a bit harder with the Pearl to maintain the same level of darkness.


Moving on to the IBM Pencil leads.  The first thing to note is that they are an obsolete size, measuring .046 inches or 1.168 mm.  The lead comes in boxes of 72, and you can get a box for the price of a couple of wood case IBM’s.  You’re not going to be able to find a pencil for it at Office Depot.  This can be a bit of a hassle, but probably also keeps the price down on the vintage lead as well.  That being said, you can purchase a new pencil on amazon made by AutoPoint. 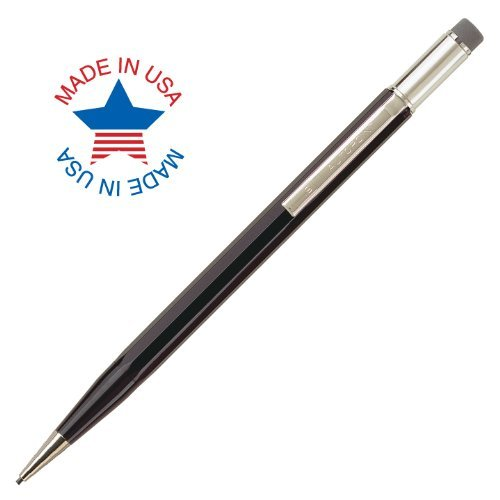 These pencils are copies/reproductions of vintage pencils, and are actually still made in the USA.  Pretty cool.  If you’re not familiar with them, you put the lead out by twisting the tip.  It’s different than what I was used to, but actually works darn well.  My only complaint is that the Autopoint design can only hold short pieces of lead, and won’t even hold half of an IBM lead.  If you want to use full length leads, you’re going to want a vintage Scripto, Wearever, or Duro-Lite.  These are cheap and available on ebay.  The Duro-lite I bought was even labeled for Scanner Lead.  The erasers on any of the vintage pencils are going to be toast, but new Autopoint erasers will fit just fine--score!


I’m about 99% convinced that the mechanical pencil lead is the same formulation as the Wood-Case IBM.  They both write dark and smooth and look the same on paper.  1.1mm lead is thick, and is about like writing with a medium dull wood pencil.  If you rotate the pencil as you write you can actually keep a pretty fine point.  I like thick lines and almost never breaking the lead, but it might be a problem if you have very small hand-writing or normally use a .5mm mechanical pencil.  The biggest difference that I notice in writing with both pencils is that the plastic body of the mechanical pencil damps out some of the paper feel.  With the wood pencil, you feel every bit of texture in the paper with a direct feedback to your fingers.  In the mechanical, the pencil body kind of smooths everything out--ridiculously smooth.  I can tell how rough or smooth the paper I’m writing on with the wood case IBM, but with the mechanical it’s all just butter.  Is it possible for a pencil to be too smooth?  I don’t know, but this setup is pushing the envelope.


We all know that Harry Potter is going to win in the end, and that the sorting hat told me I’m a pencil nerd.  The woodcase IBM is a superlative pencil and just feels special in your hand.  It writes so dark and smooth, but still lets you feel the paper.  You can get it as sharp as you want, and it just makes you want to write more.  Voldemort gives him a run for his money though, and you can argue that practically speaking he is more accomplished.  The mechanical pencil version is just so damned smooth!  It's also about as soft of a lead as you can get for a normal mechanical pencil. It might never be as sharp as the woodcase pencil, but it will keep on going page after page without needing anything more than a twist of the tip.  I don’t have to feel guilty about sharpening away a piece of history, and I can afford to use it as much as I like.  I’m happy to have both.  The wood IBM is for special occasions, and I use the mechanical pencil for every day writing and drawing at work.  Either is going to make you happy.